A little announcement before I get started. The first book in my Jo Epstein series, ASK THE DEAD has been published by Ampichellis Ebooks for both the Kindle and the Nook. If you have a reader, you may want to check out these links:
OK - enough promotion!

Today I'm writing about how choosing a particular setting for your story can create a suspenseful atmosphere from the "get go."

Alan Furst is a master at evoking the dark atmosphere of Europe during World War II - a place and time so fraught with tension and danger that the reader is immediately drawn in, even before the action starts. For example, "The Foreign Correspondent" opens on a rainy street in Paris in 1938. A Lancia rolls to a stop and then the chauffeur drives a few feet further and stops in the shadows between two streetlamps. Who could possibly stop reading at this point?

But what if you’re writing a story that is set in a more commonplace, less resonant setting than WWII—how can you make the setting work for you from the start? My own way of dealing with this dilemma is to ask myself, “What does my protagonist care about? Fear? And what setting is most likely to threaten or arouse a feeling of dread within her?”

It can be subtle—for example, a scene set in an apartment building in New York might include a burnt-out light bulb in the hallway or a window off an airshaft through which we can hear the sound of neighbors quarreling. Or it can be blatant—for example, your protagonist is on the run and is forced to sleep in a car under a viaduct in a strange city, waking up every few minutes to check her surroundings, clutching a can of pepper spray in her hand. In either case I think you’ve done your job is the reader feels apprehension and if the story is propelled forward both emotionally and physically.

What I Learned from The Novel: Live

This past week I participated as a managing editor at a remarkable event - The Novel: Live. Thirty-six prolific Northwest authors took turns on-camera at Hugo House, in two-hour writing stints, to contribute chapters to what is now a completed (but not yet edited) book that exceeds 70,000 words!

The writers worked from a bare-bones, but extremely well-structured outline that contained information on the protagonist and some of the main characters (whose names were sold at a fun, pre-event auction).

It was fascinating to see each author at work - bonding with a particular character, writing in a new voice, moving the plot forward in unexpected ways, while doing their best to maintain story continuity. Some writers focussed on moving the storyline forward, others dug deep into a particular character's history and motivations. They took occasional suggestions from the audience in the Hugo House Cafe or from the online chat that went on for six days. I found the whole experience to be inspiring and would love to see it happen again next year.

As a writer, participating in this event reinforced my belief that a strong story structure gives us the freedom we have to stretch its boundaries and take the reader into new territory.  I also learned that many writers love to "perform" their writing - that writing in public seems to heighten creativity (the pressure of writing a chapter in two hours definitely contributed some adrenalin too).

This event benefited the Writers in the Schools program and was organized by Seattle7Writers who did a great job recuriting volunteers and involving the Seattle writing community. You can go to the Novel Live web site to learn more (and even make a donation!) - at http://www.thenovellive.org/
- October 17, 2010 7 comments:

Day 4 of The Novel: Live

Deb Coletti is writing away. The novel is really coming together here at Hugo House - lots of great characters, conflict and action.

You can read individual chapters by these amazing authors at http://www.thenovellive.org/novel/

As a managing editor, I've had lots of fun passing suggestions to writers from the audience and occasionally researching on the web at an author's request as they write "under the gun" for a steady two hours each. 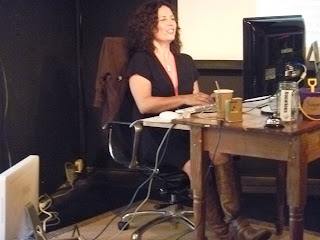 I'm here live, at The Novel:Live event and Jennie Shortridge, the first "writer up" is making great headway on the first chapter of the book! She is writing from an outline, but suggestions are also funneled through the managing editor (in this case, me) and are posted on butcher-block paper in the Green Room here at Hugo House.

The event is streaming live from http://www.thenovellive.org/novel/live/

When Jennie has put in her two hours, the next "author up" is Teri Hein and then comes William Dietrich. For a full schedule see: http://www.thenovellive.org/schedule.php

As a mystery writer, I'm especially excited to see that Elizabeth George is writing on Saturday!
- October 11, 2010 1 comment:

I've signed up to volunteer as a managing editor for The Novel:Live, a wildly creative event here in Seattle. 36 writers will collaborate on writing a book on one week's time - each contributing 2 hours of writing time starting tomorrow - Monday, Oct. 11th. I plan to share my experiences here - will take some photos and post them.

The event wil be streamed live and you can follow it from http://www.thenovellive.org/

Characters Who Reflect Their Settings

Sometimes a writer has a chance to draw a direct parallel between a character and his or her environment – Kate Atkinson does this brilliantly in One Good Turn, clueing us in to Louise’s character and the nature of the city of Edinburgh simultaneously:

Louise was running. Louise hated running but it was marginally preferable to going to the gym. The gym involved regular commitment, and outwith her job, she as crap at regular commitments. Go ask Archie. So, all in all, it was easier to grit her teeth and throw on her sweats, than jog sedately around the estate to warm up before heading off over the fields and, if she was feeling virtuous, or guilty (the other side of the coin), then up the hill and back again. The one good thing about running was that it gave you the space to think. That was the downside as well, of course. Dualism, the Edinburgh disease, Jekyll and Hyde, dark and light, hill and valley, New Town, Old Town. Catholics and Protestants. A game of two halves. 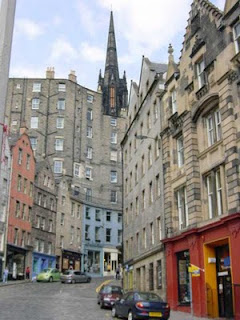 Can you think of some settings you have used in a similar way? Please share!