Driving a Story with Political and Social Issues

With our country so dramatically divided along political lines, I’m wondering how many of us are exploiting this rich source of conflict in our storytelling. Of course, there are many reasons not to do so, among them the danger of including time-stamped references that annoy our readers and the trap of using today’s headlines to drive a story that may not be published for years to come. So are there perennial political and social issues that can drive a story without running the danger that a book will become obsolete?

I would say ‘yes,’ based on how Raymond Chandler wrote about corruption and racketeering in southern California in the 1930s and '40 in The Big Sleep and Farewell My Lovely--books that became classics that are avidly read today. Another example of using current events to write a timeless story is Truman Capote’s In Cold Blood, which he calls a ‘non-fiction novel’. In this case I think the timelessness of the book comes from Capote’s masterful portrayal of the psychological relationship between two murderers who commit a horrendous crime that they might not have been capable of as individuals.

In my own work, I strive for a balance – for example, there are some current events, such as Russia’s interference in the government of Chechnya, that I used to drive elements in the plot of  The Last Matryoshka. My reasoning was that this was a persistent conflict that might change but unfortunately will not disappear overnight. In Ask the Dead, one of the antagonists is an anarchist, whose misguided idealism and thoughtless actions have a domino effect that harms several innocent characters in the book. In this case, the material was not time-sensitive and will hopefully pass the test of time.

Using political and social issues to drive a story is a big topic! So please - fellow readers and writers – join this discussion and share your own favorite “political” mysteries or examples from your own writing if you would like to do so.

In both Jo Epstein mysteries, Jo travels outside the US to work a case. In ASK THE DEAD, she tracks a suspect to a fictitious Caribbean Island—St. Dominic—and in THE LAST MATRYOSHKA Jo tangles with the Russian vory in Russia.


So what is the best way to introduce a foreign setting that our protagonist is visiting for the first time? How can we best take advantage of a new and strange environment for our story in order to foreshadow dramatic events and set the scene for conflict?

For the sake of discussion, here are two short excerpts in illustration of this:

from ASK THE DEAD

The yellow rental jeep, with its light metal frame and canvas top, seems more appropriate for Disneyland than this rugged countryside. Heading south from the airport on the coastal road, the cliffs are on my left – the same side I'd better not forget to drive on – and the proximity of empty space is both terrifying and exhilarating. When the road curves, I'm so close to the edge that I can see the roots of the palm trees growing out of the rocky cliffs. Down below, the waves of the Atlantic crash onto black sand beaches, while up here the salt spray gently stings my face. I'm entranced by the sounds of cadence-lypso on the jeep's radio, a heady mixture of calypso, rhythms from Haiti and down home funk from the U.S. If only this were a vacation.

from THE LAST MATRYOSHKA

Maybe it was the grime on the cab window, but the outskirts of Moscow seemed to project the persona of a crumbled empire, tired of keeping up appearances, with only the occasional Georgian mansion or gilded church dome breaking the monotony of socialist cement. Then, as we crossed the river and drove down Tverskaya Ulitsa into the city center, the wide sidewalks began to fill with people. Even at a distance I could see that many in the crowd out-dressed the most elegant Fifth Avenue shopper. As if on cue, the haze lifted, and I found myself in a sunlit, prosperous European-style city, bustling with energy.

Our creep slowed down to a crawl, and although the streets were so wide they made the Avenue of the Americas look like a hiking trail, I felt we were in danger of being spotted by the occupants of the BMW.

If you are a reader or writer of international suspense, please share your thoughts here!
- November 19, 2010 20 comments:

On my tour of Vladimir Central Prison, to research material for THE LAST MATRYOSHKA (the follow up to ASK THE DEAD), I saw many things on exhibit in the prison museum that I expected: weapons confiscated from prisoners, books written by writers who served time at Vladimir, medieval instruments of torture, photographs of Japanese visitors whose POW ancestors were buried near the prison. But the paintings lining the hallway were the big surprise! I knew that Russians were generally well-educated in the arts, but it had never occurred to me that this would extend to their prison population.


Mounted in the hallway leading to the prison museum, the prisoners’ paintings were beautifully rendered and told powerful stories, such as the one shown below – a prisoner shot during an escape attempt. 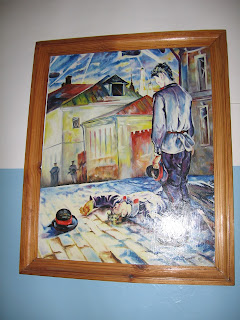 Vladimir Central is a working prison, located only 45 miles from Moscow. After a visit to the prison museum, I was taken to an “art therapy” room where both guards and prisoners come to “express themselves.” My guide said this was one of the many reforms that have taken place at Vladimir Prison in post-Soviet times. In stark contrast to this are the allegations of torture at Vladimir made by prisoners as recently as 2008. Once again, Russia proves to be the center of the ironic universe where contradiction seems to be a way of life.

Please share your own most intense travel experiences – either as writers or avid travelers – in your comments.

FC Etier, talking about Jo Epstein - the protagonist of my mystery series -  on Blogcritics said:

"Can she kick your teeth in? You bet! And as she walks away, leaves an impromptu haiku to savor while you lick your wounds."

I was gratified to hear that Jo's combined literary and crime-fighting skills appeal to my readers but I'm wondering - why are so many writers creating protagonists with super powers and the gift of invincibility? Is it the challenging times we live in that make these mega-heroes appealing?

In his essay, The Simple Art of Murder, Raymond Chandler describes the ideal gumshoe as follows:

"Down these mean streets a man must go who is not himself mean, who is neither tarnished nor afraid. The detective in this kind of story must be such a man. He is the hero, he is everything. He must be a complete man and a common man and yet an unusual man. He must be, to use a rather weathered phrase, a man of honor, by instinct, by inevitability, without thought of it, and certainly without saying it."

I love that last phrase - "without saying it." My vote is that we continue to create characters who embody the best qualities in all of us without bragging about it - whose "super-powers" are subtle and admirable.

The wonderful thing about taking pictures while traveling to research settings for your books, is that you can bring these photos home and paste them on the wall in front of your writing space. I've found that frequently a picture will connect with a story I'm working on weeks, months, even years after it is taken and that's the point  where the setting then finds its way into the book.

Pictures can also help a writer keep track of themes or intentions within a book. For example, this photo - taken in the NY subway, constantly reminded me that the goal of the protagonist in The Last Matyroshka was to exonerate her Russian emigra step-father, in spite of her negative feelings towards him. 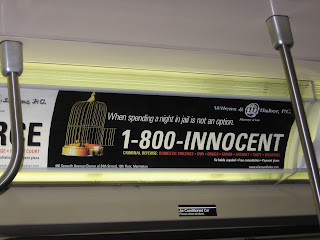 What photos do you keep in your writing space and why?